skip to main | skip to sidebar

Built as part of Helsinki's programme for last year's Europe's Cultural Capital, this little temporary theatre sits lightly on the ground and has a robust, functional elegance that comes from economic but inventive use of materials. 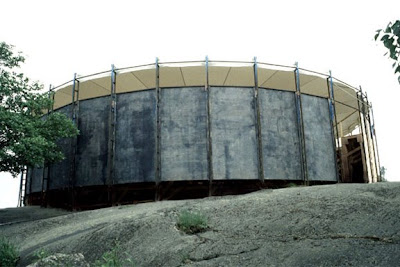 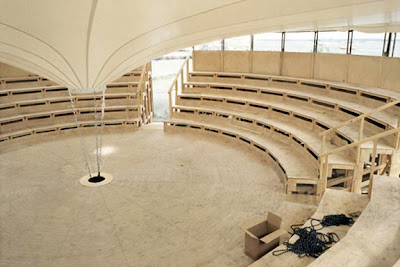 Following the success of their extraordinary rural installation in Savonlina (AR December 1999), the young Finnish practice of Marco Casagrande and Sami Rintala has continued to explore an architectural language of impermanence, economy and anarchy, that draws attention to specific environmental and social issues. (The Savonlina project, for instance, which involved the immolation of barns on stilts, was a protest at the disappearance of Finnish traditional rural life and the encroachment of the suburbs.) This commission, for a temporary summer theatre as part of Helsinki's European City of Culture programme, seems conventional by the practice's standards, but is approached with characteristically offbeat invention and vigour.

The site lies on the island of Uunisaari, part of a small cluster of islands just south of Helsinki. Home to colonies of seabirds, it is normally deserted; any intervention had to minimize disruption to its ecosystem. To this end, the installation of the theatre was timed so as not to coincide with the nesting season and extensive use was made of off-site prefabrication. The little theatre is housed in a simple drum-like pavilion composed of a plywood skin encasing a birch structure. The plywood is painted slate grey to merge with the surrounding rock, so the building looks as though it is an organic part of the landscape. With its tiers of seating enclosing a circular performance area, the model is clearly the circus tent, with its festive associations and quality of inherent impermanence. The roof is made of cream-coloured canvas, stretched taut to form a funnel that drains water into the centre of the space. The entire structure sits lightly on a timber raft foundation, moored to the site by existing iron anchors previously used to secure boats.

Inside, the homogeneous quality of the pale birch walls and seating creates the impression of being inside a musical instrument. Light percolates through the canvas roof, gently illuminating the space. During the course of its short lifespan, the theatre was used for a range of activities, including drama, music and circus performances. Once the building was dismantled, the site was returned to its original pristine state, with no visible traces of its magical temporary transformation.

1. The grey painted plywood drum of the temporary theatre appears to grow out of the landscape.

2. Clad in homogeneous birch, the interior resembles a musical instrument. Water drains from the roof into a central reservoir. 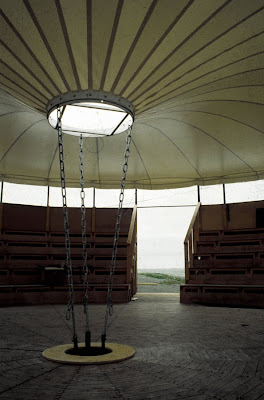 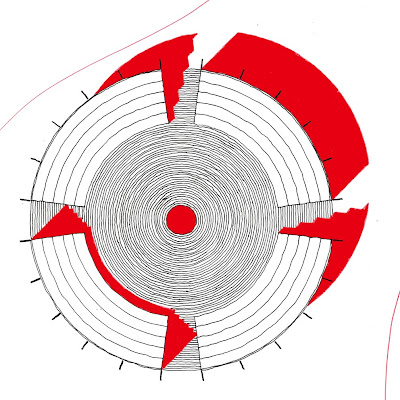 Posted by Marco Casagrande at 00:54 No comments: